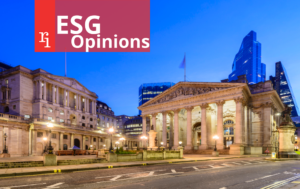 As cashflow and markets seize up in the face of the coronavirus crisis, central banks are rolling out the big guns, including ramped-up asset purchases. Unless monetary authorities exclude ’brown’ industry debt, they risk substituting one crisis for another, fuelling irreversible climate and ecological breakdown in an attempt to temporarily stabilise unruly markets and an unsustainable economy.

In 2016, the Bank of England (BoE) and European Central Bank (ECB) started buying corporate bonds in an expansion of their post-financial crisis Quantitative Easing (QE) programmes. The disproportionately high carbon intensity of these asset purchases, which subsidised companies like Shell and BP, was met with calls for the decarbonisation of central bank portfolios. In a big win for the climate movement, Andrew Bailey recently committed to shifting the BoE’s bond purchase portfolio away from high-carbon assets, while Christine Lagarde has also advocated for a greening of the ECB’s operations.

"Subsidising environmentally destructive economic activity to temporarily shore up the economy would fly in the face of all the recent climate talk coming out of the BoE, the ECB and the broader NGFS"

Yet, as a response to the economic crisis resulting from coronavirus, central bankers may be about to backtrack on their promises. Both the BoE and the ECB have announced the expansion of corporate asset purchases to inject liquidity into volatile bond markets. They’re joined by the almighty Federal Reserve, which previously only bought government bonds, now jumping ahead in monetary boldness by venturing into bond ETFs and primary market purchases. Eligibility for the Fed’s programme is primarily based on credit ratings; carbon footprint – and therefore climate risk – are entirely ignored. In other words, oil, gas, mining and more are all set to benefit from the Fed’s monetary stimulus.

Same goes for the BoE’s brand new scheme for big businesses – the Covid Corporate Financing Facility (CCFF). The initiative was set up to purchase commercial paper “issued by firms making a material contribution to the UK economy”. Whether the material contribution is in line with the government’s climate commitments appears to be irrelevant to the scheme.

Though details of the BoE’s renewal of its QE programme have yet to be published, there is a distinct possibility that it will also lack any climate or ecological criteria, especially as the Bank has failed to show concrete progress in incorporating climate risk considerations into its operations. In his letter to the Chancellor, Bailey wrote that there will be “the opportunity for HMT to provide views to the MPC on the design of private sector asset purchases” but there was no indication that the MPC will push for exclusion of brown assets in line with Bailey’s commitment to decarbonise the Bank’s portfolio.

Meanwhile, the ECB’s Pandemic Emergency Purchase Programme (PEPP) announcement simply stated that it “will include all the asset categories eligible under the existing asset purchase programme”. No climate considerations there, either.

Therefore, at a time when our economy is in need of deep restructuring to meet governments’ climate goals, major central banks appear fully prepared to throw their weight behind the perpetuation of dirty energy and resource extraction regimes. Subsidising environmentally destructive economic activity to temporarily shore up the economy would fly in the face of all the recent climate talk coming out of the BoE, the ECB and the broader Network for Greening the Financial System (NGFS). Even the Bank of International Settlements recently acknowledged a role for central banks in the transformative change that the climate crisis necessitates.

Retreating now on prior green commitments will further embolden the big banks – which have thrown $2.7trn at the fossil fuel industry since the Paris Agreement – in their efforts to resist central banks’ forthcoming climate regulations, including mandatory climate risk disclosure and climate stress tests.

Of course, many will argue that with a colossal economic recession on the horizon, now is not the time to worry about which companies to support and what strings to attach. But beyond the horizon of the current crisis, intensified impacts of environmental degradation – which already kills on a large scale today – will present an even bigger crisis for humanity. No matter the scale of the impending economic crisis, we cannot lose sight of that threat to the very viability of our economy and society. It is the duty of our public institutions to ensure that their response to recession is carbon neutral or negative.

For central banks, this involves first and foremost committing to the exclusion of brown industries such as oil & gas, coal, and airlines from all asset purchase programmes. Other than agreeing on a definition of the term ‘brown’ and therefore which assets to exclude, this would not be a resource or time-intensive commitment.

Third, as we emerge from the current crisis, emergency facilities introduced by central banks should be mobilised explicitly for green lending and investment. For example, the BoE’s Term Funding Scheme for SMEs is an example of the kind of credit guidance that Positive Money and others have been calling for to foster the green transition. Further, monetary financing of government spending through secondary or primary market purchases could also facilitate increased public investment in green infrastructure.

While all eyes are on possible airline and fossil fuel bail-outs offered by finance departments, unaccountable central banks are locked and loaded to stealthily subsidise environmentally destructive economic activity, in direct contravention of Paris Agreement commitments. Civil society and the public must push back. Despite the current public health crisis and economic turmoil, green policies must remain high up on the agenda.

David Barmes is an economist at Positive Money, a research and campaign group working towards a money and banking system which supports a fairer, more democratic and sustainable economy.