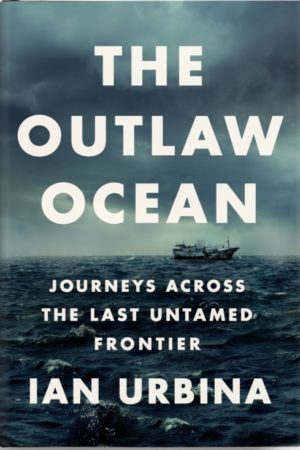 Pulitzer Prize-winning New York Times journalist Ian Urbina was in London last night to give a talk about his new book The Outlaw Ocean.

The book, the product of five years of research and travelling the world’s oceans, documents the criminal world of the high seas, a world hidden in plain sight. Naomi Klein called it “just incredible” and I would not disagree.

The truth is, we all rely on the oceans in one way or another and Urbina’s work – which has been bought by Leonardo di Caprio and Netflix – is a monumental piece of work that describes an industry were the normal rules of commerce and law rarely apply.

I first met Urbina a few years ago when I was on a panel with him at a Blue Economy event organised by Prince Charles. I was to speak about ESG and sustainable investment and explain how investors really do take all this stuff seriously.

But this paled into insignificance alongside Urbina’s heart-rending tales of exploitation. Here was reportage, measured but quietly persuasive, from the blood-soaked front line of our economic system.

But there are ways investors can take action on ocean issues. There’s the new Sustainable Blue Economy Finance Principles, developed in partnership between the European Commission, WWF, the Prince of Wales’s International Sustainability Unit and the European Investment Bank (EIB). The United Nations is working on the first-ever high-seas conservation treaty.

RI’s involvement includes our Investors and the Blue Economy research project in collaboration with Credit Suisse and supported by the European Commission, WWF and UNEP FI and we are holding an Investing in the Blue Economy event on December 3 amid indications that SDG14, Life Below Water, is receiving the least capital investment globally.

Last night, Urbina, in conversation with Moneyland writer Oliver Bullough, touched on the difficulties of tracing the ‘Russian doll’ ownership of vessels, where ultimate ownership and therefore responsibility is often impossible to determine.A follow-up question from me about the role of banks and insurance firms in the maritime industry led Urbina to refer to Bullough, who has made a career out of trying to get to the bottom of ownership.

We’ve all heard of flags of convenience but I didn’t know that the Liberian flag is administered out of Virginia in the US. The St Kitts & Nevis registry is operated from the humdrum London suburb of Romford. The issues Urbina details are closer to home than you might think.

Urbina prefers not to answer sweeping questions about how to solve the injustices in the industry; rather, he backs feasible steps such as more comprehensive ship registry systems.

After the event, a fellow attendee buttonholed me to say my question about ownership and the role of finance “hit the nail on the head”. It turns out he is a former senior customs official now running a tax and border control consulting firm (Grant & Gutsell).

The question of ownership, and the role of banks and insurers – regulated entities with shareholders – had not occurred to me in this context. My view had been that the maritime industry is too fragmented, too artisan, ultimately too lawless, for any sort of role for responsible investors. So this vital sector falls through the cracks because no one cares enough to tackle the issues.

But there are ‘lines of enquiry’ for sustainable investors to open up, to try to address the problem that Urbina writes about so eloquently in Outlaw Ocean. There’s also the potential for investors to engage with policy-makers on these issues; Urbina bemoans the lack of political will to solve these problems.

One thing is clear, he has exposed these issues in a way that it’s now not possible to claim ignorance of them. Responsible investors should respond to the challenge Urbina presents.