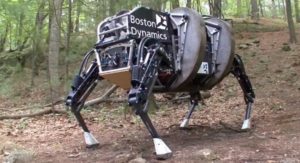 Two of Triodos Bank’s socially responsible investment (SRI) funds plan to divest their shares in Google following the US tech giant’s acquisition of a company that is developing robots for the US military.

The funds in question are Triodos’ ‘Sustainable Equity Fund’ and its ‘Sustainable Mixed Fund,’ which have assets of €326.3m and €137.6m, respectively. Google is the single biggest holding for each of the funds (4% and 1.6%).

However, the SRI funds have decided to exclude Google as it no longer meets the criterion that portfolio companies should not be involved in the manufacture of, or trade in, armaments.

Last December, Google bought Boston Dynamics, a robotics company that has been contracted by the US military to develop robots.

The prototypes, known as ‘BigDog’, ‘Cheetah’, and ‘Atlas’ could be used to carry out long-distance warfare in rural areas, the Dutch ethical bank said.“While Google claims it will not focus on activities involving armed robots, they have not confirmed this to Triodos despite our active engagement efforts,” said Triodos. “As we aim to be a frontrunner in the sustainable investments sector, we have a zero tolerance policy regarding armaments.” A spokeswoman for the Dutch bank said the funds would sell their Google holdings over the next six months.

The asset manager of both Triodos-branded SRI funds is Delta Lloyd Asset Management, a unit of the eponymous Dutch insurance giant. Both funds make use of environmental, social and governance (ESG) research from Sustainalytics, which is partly owned by Triodos.