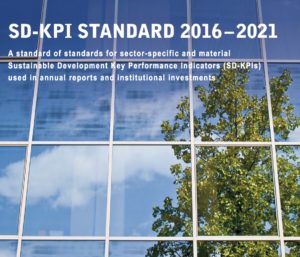 An updated set of key performance indicators (KPIs) for sustainable development has been launched today in cooperation with the German Environment Ministry and the Sustainability Accounting Standards Board (SASB).

The new offering is called the SD-KPI Standard 2016-2021 and was developed by SD-M GmbH (Sustainable Development Management), the German investment consultancy founded by Axel Hesse, the sustainability consultant who recently joined Metzler Asset Management as Director of ESG Integration.

The copyrighted standard of standards for sector specific and material ‘SD-KPIs’ are intended for use in annual reports and institutional investments. The initiative builds on the SD-KPI Standard 2010-2015 first published in January 2010.

There is said to be a “high degree of overlap” between SD-KPI and SASB’s standards; a Japanese and a Chinese translation of the 2016-2021 standard will also be published.

SD-KPIs have been called a “minimum reporting standard” by the German Environment Ministry for corporate sustainability in annual reports prepared under German or EU accounting rules.The EU Commission is currently preparing non-binding guidelines on methodology for reporting non-financial information. The Commission will publish the guidelines by December 6 this year.

It comes as there is due to be a workshop on the topic at the European Commission’s Directorate-General for Financial Stability, Financial Services and Capital Markets Union (DG FISMA) in Brussels next week (September 27). Hesse said the SD-KPI Standard 2016-2021 is a contribution to this development.

SD-M has worked previously to develop sustainable equity indices with STOXX, the Zurich-based index provider. It works with Sustainalytics to offer the SD-KPInform database to asset owners, asset managers as well as index and data providers.

In his new role at Metzler, the venerable Frankfurt-based house, Hesse reports directly to Chief Investment Officer Rainer Matthes. In an interview with RI earlier this year, Matthes outlined his vision for integrating ESG at the firm. Hesse remains a shareholder in SD-M though the firm is now headed by new Managing Director Florian Brechtel.