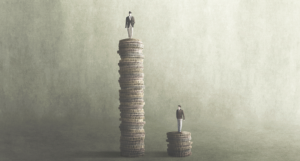 NEI Investments has been engaging with a raft of US and Canadian banking giants regarding equitable compensation, its latest ownership report reveals.

In the Q4 Active Ownership Report, published earlier this week, the Canadian asset manager explained it has been in dialogue with Bank of America, Bank of Nova Scotia, Citigroup, Morgan Stanley, JP Morgan Chase, CIBC, and Wells Fargo, as well as American Express.

Regarding work in the US, Jamie Bonham, Director of Corporate Engagement at NEI Investments, explained to RI: “Our engagements with US companies revolved mostly around our concerns about excessive compensation and our use of an absolute cap on executive compensation relative to the median household income. They were all flagged because of ongoing excessive compensation issues where we voted against the ‘say-on-pay’ advisory vote on compensation, and possibly some of the board members because they were above the compensation cap we have defined as excessive for our proxy voting purposes.”

By contrast, he noted that conversations with the Canadian banks were not pursued because of actual excessive compensation in 2021, “but more so to learn about any developments in the banks in terms of using vertical metrics to address inequality and to share […] our heightened expectations”.

The Canadian banks were also engaged on their Net Zero commitments and progress to date, as well as their diversity and inclusion practices within their organisation and in their lending decisions.

Comparing the two geographies, Bonham concluded: “Our general experience has been that the US banks are less receptive to the conversation of executive compensation and inequality, whereas the Canadian banks seem to be more receptive to dialogue.”

A spokesperson for Bank of America pointed to its proxy statement which said at its 2020 AGM “nearly 95% of the approximately 6.2 billion votes cast favored our “Say on Pay” proposal. This represents the 10th consecutive year of “Say on Pay” approval of 92% or higher.”

The statement also noted: “Additionally, in 2020 and early 2021, management and directors met with investors owning approximately 24% of our outstanding common shares and, at the majority of these meetings, discussed our executive compensation program, human capital management, and other compensation-related matters. These discussions, together with the 2020 “Say on Pay” results, indicated strong support for our 2019 compensation program and influenced our decision to maintain a consistent overall approach for 2020.”

At the time of publication Wells Fargo and American Express had not responded to RI’s request for comment.

Tech giants, including Alibaba Group, Alphabet, Facebook, Microsoft, and Blackberry, have also faced scrutiny from NEI Investments, this time on human and digital rights issues as part of collaborative engagements with other investors.

“The responsiveness of different companies varies, though as a whole we have found the responsiveness of tech players to be underwhelming. However, we continue to lean into our role as an investor to encourage action on these issues,” Michela Gregory, Director, ESG Services at NEI Investments, told RI.

“Many of these engagements are ongoing given the fast-moving and evolving nature of technology, and the need for companies to develop policies and processes that can address human rights risks in this context,” she added.

Regarding Microsoft, NEI Investments also abstained from voting on a proposal asking it to prohibit the sale of facial recognition technology to all government entities.

“While we shared the proponent’s concerns about the human rights risks related to facial recognition technology, we felt the proposed solution was too prescriptive. We feel it is crucial for the company’s long-term sustainable performance to implement a robust human rights due diligence process that includes assessing, preventing, mitigating, and remedying adverse human rights impacts resulting from its business operations,” the report explained.

On voting, it did support 95% of the 22 shareholder resolutions, which focused on reporting on human rights impact assessment, greenhouse-gas emissions reduction targets, climate-related lobbying, racial equity audits, and diversity and inclusion efforts, at 10 companies.

At the time of publication Alibaba Group, Alphabet, Facebook, and Blackberry had not responded to RI’s request for comment.

According to the Q4 report, NEI Investments participated in a call with the firm in November. This meeting was a follow-up to a shareholder proposal NEI co-filed early in 2021 on the issue of how Nike examines and reports on the actual and potential human rights risk from their cotton sourcing.

The report concluded: “Nike says it’s collaborating with partners on new approaches to traceability, which is the ability to track processes from procurement to production as products move among different stages of manufacturing.”

However, it then noted that Nike ceased to be a holding in NEI’s funds as of November 13, 2021, “based on our sub-advisor(s)’ investment process. As always, holdings are subject to change without notice.”

When RI inquired whether the move was linked to the engagement work, Gregory said it was unrelated.

At the time of publication Nike had not responded to RI’s request for comment.

On supply chains, the investor also supported a letter sent by the Canadian Network for Corporate Accountability to the Federal Government, urging it to adopt legislation requiring Canadian companies to undertake human rights and environmental due diligence throughout global operations and supply chains.

Currently plans are underway by the European Commission to adopt a directive which would also impose said obligations; however, as RI reported, it has been beset with delays.