Responsible Investor
Home Asset classes What would a $70 carbon price do to a sector-neutral investment portfolio?
Return to search
Environmental

In May 2021, the UK auctioned the first allowances under its own Emission Trading System (UK ETS), which went live in January, replacing the EU ETS. The establishment of the UK ETS is another sign that countries are increasingly serious about tackling greenhouse gas emissions (GHG).

According to the World Bank, there are now 64 carbon pricing mechanisms in place around the world, either in the form of a direct carbon tax or a cap-and-trade system, covering about 20% of global GHG emissions. The EU ETS, one of the world’s largest carbon markets, covers roughly 40% of the EU’s emissions from electricity generation, industrial manufacturing, and aviation. The EU ETS is facing a revamp as part of the European Green Deal with tougher emission limits proposed and more industries to be included in a shift towards stricter climate policies. For instance, the EU plans to include shipping in the scheme – a sector judged notoriously difficult to decarbonise – increasing the pressure on maritime transportation to accelerate its transition to greener technologies.

Scientists recommended that to meet the target of well below 2 degrees Celsius under the Paris Agreement, a carbon price of $40-80/tCO2e (tons of CO2 equivalent) was needed for 2020. Even though the situation has improved sharply in Europe over the last year, most of the world’s carbon prices were far below the required level.

We analysed constituents of the MSCI World Index using our database and models, to determine how harshly a portfolio comprising the least pollutive companies from each sector would be impacted by a carbon price compared with a portfolio of the most polluting companies in each sector. We determined the environmental footprint of companies based on their ‘Resource Efficiency Score’, which includes carbon emitted, waste generated and water consumed, relative to revenue generated.

A portfolio of the top third of companies in each sector ranked by their Resource Efficiency, and representing nearly 30% of the index’s market cap, currently emits about 633 million tCO2e (based on Scope 1 and 2). In comparison, a portfolio of the bottom third of companies in each sector by Resource Efficiency, amounting to only 15% of the market cap, emits approximately 2.6 times as much at 1.66 billion tCO2e.

In August this year, the EU ETS price set a new record at $70 having risen from $40 at the end of 2020. If all emissions of the ‘efficient portfolio’ were covered by a carbon price of $70, the underlying companies would face an aggregate bill of $44bn. Given the companies in that portfolio have a market size of about $14.1trn, for the investment community, the bill equates to $3.1m per billion dollars invested. The companies in the efficient portfolio generate income net of total expenses of about $392bn, and that $70 figure would result in an 11% drop in aggregate net profit – a sizable impact.

The ‘inefficient portfolio’, on the other hand, would be hit much harder. It already generates much lower aggregate net income of $269bn¹, albeit part of this could be a reflection of their smaller size. Nonetheless, the substantially higher environmental footprint of these companies would translate into a much larger aggregate cost of carbon: $116bn or roughly 43% of net profit. That’s a cost that would have devastating impacts on their economic viability – relative to the market capitalization of that portfolio, the carbon cost would amount to $15.2m per billion dollars invested.

Some sectors will struggle more than others

Looking at sector level effects, both sector-neutral portfolios would see the aggregate net profit of the oil and gas industry wiped out under a $70 carbon price. The inefficient portfolio would struggle even more as it would see the cement-heavy construction industry and the energy-intensive industrial metals production generate an aggregate net loss as well. The same holds for utilities in the inefficient portfolio, whose energy mix relies more heavily on fossil fuels than the mix for companies in the efficient portfolio that already tilt towards low-carbon energies.

Note that the above describes the aggregate loss across whole industries and sectors. There will, of course, be companies that on an individual basis are better placed than others, either because they  are the least pollutive among their peers or they are spectacularly profitable.

In conclusion, resource efficient companies within their sector will be able to compete in a low-carbon world – not only by being better placed to manage the uncertainties of future environmental regulations, but by already being more resilient to the threat of higher carbon pricing.

¹ We acknowledge that the analysis is an approximation and that the financial impact could be overestimated given that a portion of the emissions of both the Efficient and the Inefficient portfolios have already been  subjected to a carbon tax. However, most industries in the MSCI World are not covered by a carbon pricing  mechanism such that our simplified example gives a better idea of the true extent of a strict carbon tax. 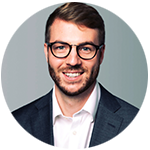 Tom Steffen is a Quantitative Researcher at Osmosis Investment Management