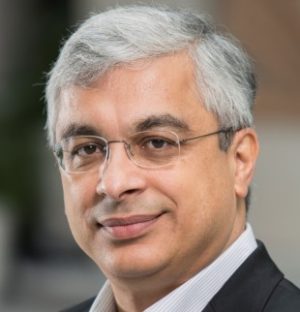 Things are changing for the International Finance Corporation (IFC). As the commercial arm of the World Bank, it aims to make 28% of its investments ‘climate smart’ by the end of the decade, and help leverage $13bn in private sector financing annually. But changes to the fast-paced green finance landscape mean the multilateral development bank is rethinking its strategy in a bid to stay ahead of the game.
Falling prices, reduced risk perception and increased liquidity in the renewable energy sector mean the bank will soon not be required to participate in clean energy the way it has over recent years, predicts Vikram Widge, Head of Climate and Carbon Finance at the World Bank Group. “That’s great – because it means our work has been effective. But those projects were our bread and butter so, although we’re geared up for our target, I think it’s going to be that much more challenging to achieve if you can’t rely on mainstream, large scale grid-connected renewables. How do you shift from that?”
The answer, in part, is to refocus from grid-connected assets to less mature, distributed models, such as rooftop solar.
“When I left college in India in the early 80s, there was a seven-year waiting list to get a [telephone] landline,” says Widge. “Now, every street vendor has access to a mobile phone, even if they don’t have a shop. That’s the kind of disruptive technology we have to support in the climate space to help us leapfrog traditional energy forms.”
But these assets tend to offer small-scale investment opportunities, he points out, and that’s not the level most investors want to operate at. “So our next goal is to try and create products that can match the strategies of the countries with the strategies of the investors, through aggregation and securitisation, for example. We need to give investors something safe and simple, which they understand and that can be integrated more easily into their broader asset allocations.”
Other focus areas for the IFC over coming years include transport, waste, energy storage, green buildings (a sector where the IFC has more than quadrupled its investments since 2015), industrial energy efficiency and ‘climate-smart’ agriculture. Many of these will be pulled together under a more holistic ‘cities’ agenda.
As well as opening new sectors and technologies up, the IFC has another strategy that will help it scale climate finance and achieve its latest investment targets.
“We have enormous advantages in domestic markets – we’ve got 800 local financial institutions as clients, who we lend to and offer technical assistance to. We’ve already moved from lending to them for sustainable energy to lending to them for new products like green mortgages but, as their home countries start to – hopefully – deliver on their Nationally Determined Contributions (the climate commitments made though the Paris Agreement), we can go much deeper with them.” One example already in play is the IFC’s green bond fund, which answered many investors’ prayers – announcing plans for a $2bn vehicle with a mission to stimulate growth in so-far sluggish emerging market issuance.The fund is expected to launch by the end of the year, following fundraising from the institutional market, and will be run by IFC’s Treasury, in collaboration with French asset manager Amundi. However, IFC Group will also work with its 800 clients to identify which ones have the potential to issue green bonds, and will advise on eligibility and reporting practices. The bank will offer technical assistance to those partners to help them structure credible green bonds in which the fund can become an anchor investor. The fund will include first loss money, making it a safer and more viable way for private investors to back emerging markets green bonds. Those who want to buy the notes directly can do so (IFC will only be a cornerstone investor, not the only one) and may find reassurance in the fact the bonds will be developed in alignment with the IFC’s environmental and procedural standards.

“I think with a more specific green and resilience-focused filter in the future, a fund could really take this agenda forward” – Vikram Widge, Head of Climate and Carbon Finance

But it’s not all about fixed-income, Widge stresses, despite the almost deafening buzz around green bonds in recent years. IFC also has a $9.8bn Asset Management Company (IFC AMC) which runs a $418m climate and resource efficiency fund called Catalyst.
“A fund of funds is a huge leveraging instrument: we expect to leverage five times what we put into our own funds, and then we would expect the funds we invest in to leverage at least three times what we allocate to them – so it has significant multiplier effects in getting investment into these projects.”
The Catalyst fund is almost committed, but IFC AMC also runs mainstream infrastructure funds which Widge thinks could be key to scaling up green investment.
“On paper, they may look at infrastructure at large, but because IFC’s guiding principle is sustainable development, essentially it’s all sustainable. And I think with a more specific green and resilience-focused filter in the future, a fund could really take this agenda forward.”
Linked into this idea, the IFC is currently rolling out a pilot ‘Climate Risk Evaluation’ scheme for some key infrastructure projects; and it is working with the World Bank and other MDBs on defining criteria and metrics around resilient infrastructure.
“We want to see climate resilient infrastructure as the preferred class for all investors. No investors should be settling for infrastructure that can’t prove its ability to withstand climate risks – these are 20-40 year assets. Large financial institutions must require these considerations to be integrated into the design of projects before financing them. Then hopefully we will see accepted standards develop.”