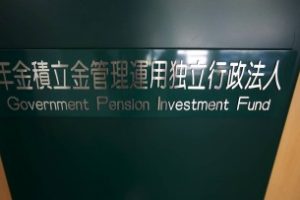 Japan’s Government Pension Investment Fund (GPIF) has selected its first low-carbon indices as benchmarks, as the world’s largest pension fund continues to ramp up its ESG investments.
The $1.3trn scheme will track two new benchmarks from S&P Dow Jones Indices, which have been launched under the banner of S&P Global Carbon Efficient Indices. They include the S&P Global Ex-Japan LargeMidCap Carbon Efficient Index and the S&P/JPX Carbon Efficient Index. The latter has been developed with the Japan Exchange Group. GPIF has allocated ¥1.2trn ($10bn) to the pair.
The two S&P-only indices are tilted using data from Trucost – the climate analysis house it bought in 2016 – with a view to overweighting low-carbon firms while underweighting relatively heavy emitters.
Last year, GPIF began its move into ESG equities, making initial allocations of ¥1trn into three newly-created, specialised indices – two from MSCI and one from FTSE Russell. Two of the indices considered broader ESG issues, while one focused solely on gender and female empowerment. All were focused on domestic equities.GPIF said at the time that it planned to commit ¥3trn overall to sustainability strategies. It didn’t take long for the fund to follow up with a tender for indices covering international equities, putting out an RfP last November, which closed in January – this time focused specifically on climate change.
Its huge size means that GPIF’s moves into ESG have already begun causing ripples in its own country and overseas. One market participant told RI that the key takeaway from PRI in Person last week “was that Japan was noticeably present for the first time”.
Writing in the FT last week, Japan’s Prime Minister Shinzō Abe said that energy would be a major focus for the Japanese government next year, with a view to reducing fossil fuel use and improving renewable energy supply. and discussing the physical risks occurring from climate change.
“Momentum is already growing in the private sector. The number of companies engaging in environment, social and governance-focused investment or issuing green bonds is rising dramatically,” he wrote, citing GPIF as an example. “Investors now require businesses to analyse environmental challenges and disclose potential risks as well as opportunities.
“Japan will preside over the G20 next year and focus on accelerating the virtuous cycle of environmental protection and economic growth,” he concluded.

Note: This story was amended after publication to include the asset allocation made to the new indices