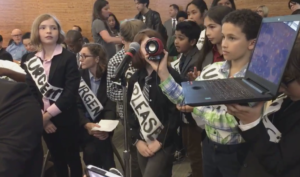 The California State Teachers Retirement System has become the latest pension fund to face protests calling for it to divest fossil fuels — but the second largest public pension fund in the US says exiting companies has no impact.
At the fund’s Investment Committee meeting earlier this week, students from youth climate justice organisations skipped school to attend and ask the fund to divest from fossil fuel companies.
Other funds worldwide have faced similar protests, for example the offices of Sweden’s AP3 were targeted by Greenpeace last year. Just under a year ago Greenpeace branded Dutch investors ‘the Dirty Four’, which led to this response from PGGM investment chief Eloy Lindeijer.

A spokesperson from CalSTRS told RI: “We do not plan on divesting from fossil fuels, although we do have individuals who are part of organisations that speak during our board meeting public comment section on their desire for us to divest.”
In an interview with RI a few years ago, Chris Ailman, the fund’s CIO, had said that companies simply don’t hear when pension funds divest. This was expanded upon this week by a CalSTRS spokesperson, who said: “Divestment silences our voices because we no longer have a seat at the table. For example, we divested from [private prison] CoreCivic last November and other than a small impact the day of the press release, their stock wasn’t impacted by us.”

While the fund has divested from some companies in certain industries, like the private prison industry and firearms, it generally does not support divestment as an investment strategy. “Divestment eliminates our rights as a shareholder to engage with management and raise awareness of long-term risks and encourage change,” says its 2017 Corporate Governance Report, divestment has been ineffective in bringing about social change.”

The report estimated that the total compounded costs of all its divestments (tobacco, firearms, US thermal coal and geopolitical restrictions) – over time – are $4.8bn compared to a ‘standard’ index return. The fund has exited most, if not all gun and ammunitions manufacturers since 2012, including, most recently, American Outdoor Brands.

“We divested from CoreCivic last November and … their stock wasn’t impacted by us.”

“We are still in the process of hiring someone to work on advancing the Firearms Principles and engaging with stakeholders around the issue of firearms,” said the spokesperson. The principles require a limited period of engagement, which, if unsuccessful, would move to voting against the whole board, and then, finally, to divestment.
While this policy is unlikely to be applied to fossil fuel holdings, at the same board meeting, the fund is active on climate risk. The Investment Committee took action to amend their fiscal year 2019-20 work plan to include a study on a low carbon future, as well as updated language for their statement on carbon pricing – something that Ailman and others in the fund have been pushing for some time.
“Individuals and groups who stress divestment are in a sense seeking a boycott,” concluded the spokesperson. “Unfortunately, that works only if one can limit capital. Right now, there is too much capital in the world—China and Saudi Arabia have trillion dollar funds.”