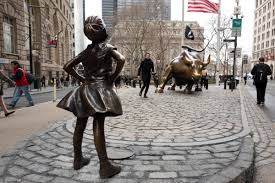 State Street Global Advisors’ new diversity index, the SSGA Gender Diversity Index, is not the first index based on diversity but it’s probably the deepest.

Already in existence were the Barclays Women in Leadership (WIL) Index and the MSCI Women on Boards (WOB) Index. SSGA could have launched an index based on either of these, contingent on coming to an agreement with either MSCI or Barclays, but it was working with a client and the view was that the new WIL index was very stringent and required companies to have a female CEO, thus limiting the number of possible companies, while WOB only looked at women on boards, so the decision was made to design its own.

But before we discussed the make-up of the index, I asked about the ‘Fearless Girl’ statue by artist Kristen Visbal, that State Street installed to face down the ‘Bull of Wall Street’ by Arturo Di Modica – whom Jenn Bender, Director of Research for SSGA’s Global Equity Beta Solutions team, described as the new statue’s “most prevalent antagonist out there”.

Bender continued: “We wanted to commemorate the one-year anniversary of SHE. It’s something we believe in, a means for investors to vote with their feet to invest in companies that demonstrated a strong commitment to female leadership. That was the original premise and still is. Fearless Girl was a great way to demonstrate our commitment to gender diversity on the stewardship side.

“When we vote on board composition we are going to scrutinize them on their diversity. The first negative reaction was just ‘this is just a marketing gimmick to promote your ETF’. But what we are trying to do is to get recognition of gender diversity imbalances in corporate America out in the marketplace.

“Many people don’t in fact know that part of the revenue of the ETF gets donated, channeled into charities that support girls STEM [science, technology, engineering and mathematics] education. Moreover, we’ve actually seen many studies launched in the last two years showing an actual link between financial performance and gender diversity.

“This was something that most investors didn’t really look at before. In the past, ESG-oriented investors would vote for environmental causes, against carbon emissions, for gender diversity, all the issues that they cared about, and be perfectly happy sacrificing performance.

“Now what the research is saying is that there’s a link between profitability and gender diversity; it’s waking up a lot of investors. I haven’t been to a conference lately where it hasn’t been brought up.”
I asked Bender how the companies in the index had been selected. “It’s every senior female manager in the company including those that sit on the board, that’s one category,” replied Bender. “The second category is every female manager in the company excluding the women on the board. And the third category is every senior female manager plus all the women on the board, including the non-employee directors.“When we did our first pass requiring 30% in all three categories we ended up with around 60 companies (on average since 2002). So we switched it out to ‘30% in at least one of the categories’, which gives an index that has 140 companies (on average since 2002). The reason we used three categories is because there’s a fair amount of difference in which companies would show up if we only used one of those categories. So rather than make assumptions about which female managers would be the most important, we wanted to include them all. For example, a company could do well because it has a lot of female board members, but could be excluded because it has few senior managers who are female.”

The index is neutralised for sectors, meaning that the top 10% of companies by market cap in each sector are included in the index if they meet the diversity standard outlined above, in order to include all sectors. Bender described the process: “There is no right answer to whether or not you should neutralise sectors. What was clear from the beginning was: do we want to reward companies with good gender diversity relative to their own sectors or to the economy as a whole. For example, we know that IT is terrible at promoting gender diversity so, if we compared IT companies to the rest of the sectors, we are going to be holding one, at tops three, IT companies, if any.

“So that was actually a philosophical debate that we had both internally and with the client. And we decided on restraining sector bets. If Google and Oracle had more senior managers than their peers, we wanted them in the index.”

The detailed paper outlining the construction of the index clearly states that the firm does not believe that gender diversity is a ‘factor’, as defined by E.F. Fama and K.R. French.

I said to Bender: on the one hand, you are saying it makes a difference and there is alpha with gender diversity and that’s why we are doing this, and on the other side, you say diversity is, potentially, not a factor in what’s influencing the outperformance here, and that there are other issues at work.

She replied: “We have a significant smart data business, and we have a perennial debate about what smart data is, and our definition is that smart data is built on durable, persistent factors. That, and a premium over time. The issue is that gender diversity absolutely could be one of those factors, however, there is not as much research about this, or any ESG factor, as there has been around the traditional factors such as size, value, momentum, and quality. So we had to make it clear that, at this point in time, diversity and any other ESG issue have not been shown to be a factor, and by that I mean thrown against the wall time after time after time by a battery of academics.”

The index is rebalanced annually rather than quarterly like many others. Bender explained: “If you rebalance the index quarterly you have more timely data, but you also have more turnover. When we tried annual rebalancing, the results were really not that different, the performance, the volatility, the downside risk.

“So, if all else is equal, the lower transaction costs for annual rebalancing made sense to us and led us to that decision.”

I asked what the level of turnover was. “It’s about 30-40% one-way, annual turnover. So, once a year when we apply our rules a group of companies will fall out and another group will come in.” So, how does that compare with other media ETF’s? “It’s actually lower than other indices we have analyzed;” said Bender, “some of the other diversity indices have fewer names or more frequent rebalancing schedules, both of which lead to higher turnover.

“It’s important to note that the turnover in our index is not just due to companies’ gender diversity ratios changing but also market cap, given our methodological approach to sector balancing. When we apply our rules again each year, changes in market cap are just as much major drivers of this turnover as changes in the number of women in senior management positions.”

Finally, I asked whether State Street itself would be in the index. “While we’re not allowed to hold State Street in this ETF,” said Bender, “it is true that even if we were allowed to, no large major banks including State Street, would qualify for the index.“Within the financial services sector, the companies that made it in are midsize banks, credit card companies, real estate and insurance companies.”

I commented that there’s clearly a commitment to this from the organization, but sometimes you have commitments that are not reflected in the organisational structure itself. Bender countered: “Global Advisors, the asset management arm, is one of the smaller divisions in terms of the number of employees. The creation of SHE obviously started with us, but the focus on gender diversity has always been a priority of State Street’s CEO, Jay Hooley. Since taking the helm in 2010, Jay has placed an increased focus on diversity, with State Street instituting numeric targets in 2012 for women and people of colour in leadership and tying part of executive compensation to meeting those metrics. We are proud to have quite strong gender diversity in Global Advisors; for instance, we have more female portfolio managers than any of our major competitors. And we’re excited to be spreading the message across the organisation.” Link