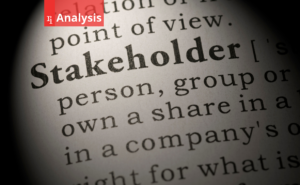 You know, there are some things I would like to be wrong about. When I wrote about the battle of stakeholderism in June, I finished with a throwaway line: “And in some, this being 21st century USA, there is merely a cynical ‘adoption’ of a set of principles in order to prevent real change from happening.”

I did not realise how right I was.

It found that the BRT signatories, compared to their peers, committed more environmental and labour-related compliance violations, and paid more in compliance penalties. They had higher market shares, potentially signifying anti-competitive behaviour. They also spent more on lobbying policymakers and had worse performance.

"The market viewed the BRT Statement as cheap talk rather than a commitment to change." – academic study

As the authors say: “More specifically, the Business Roundtable’s Statement suggests a need to improve the treatment of non-shareholder stakeholders in a firm. If signatory firms are, in fact, leaders in this regard, we should observe fewer – and/or less severe – violations reflective of harm done toward their customers and employees relative to non-signatory firms.” As well as fewer environmental and societal violations. Instead, the study found that these signatories had more such violations than their peers who hadn’t signed.

The authors take this as a suggestion that the signatories have more to hide.

The study notes that the compliance violations against employees, the environment, society and customers “do not just reflect trivial matters”. For example, BRT signatories are also more likely to have had to settle high-cost lawsuits alleging workplace discrimination or “wage theft”. Their higher market share might also suggest that they are likely to face scrutiny in future merger and acquisition transactions.

In addition, the paper alleges that BRT signatories are more likely to “attempt to head off potential regulatory scrutiny”, and that is why “they spend more on lobbying policy makers than their non-signatory counterparts”. The findings on market shares and lobbying do not result in superior performance “because signatory firms report lower stock returns alphas and worse operating margins”.

And finally, it found that, despite underperforming their peers, the signatories’ pay their CEOs more relative to their peers which may or may not be associated with the fact that their boards “contain a lower percentage of independent directors, relative to non-signatory firms”

Attempting to give the signatory firms one last chance to redeem themselves, the paper says that, perhaps, they were signing the statement to signal “an intent to change their ways”. Obviously, it is too early for them to test for this, but they did test to see if they were improving in the run up to announcing their commitment to the statement.

The head of ESG for a large asset management firm told RI: “This emphasises for me the paradox that on the one hand investors appear best positioned to hold CEOs accountable on strategies that benefit investors as well as society more broadly, while on the other hand investors’ positions are being hollowed out – not only by the BRT signatory CEOs, but even by ESG-minded investors who applaud them.”

In what could be even more of a bombshell for the SRI community – I mean, let’s face it, ‘BRT signatories may be hypocrites’ will probably not come as that much of a surprise – the paper calls into question the effectiveness of two of the largest ESG funds: BlackRock’s iShares MSCI KLD 400 Social ETF and Vanguard’s FTSE Russell FTSE4Good US Select index.

The paper’s purpose in doing this is that while asset managers can “enforce managers’ potential statements about corporate purpose through their choice of investment vehicles” they should be able to trust those investment vehicles. Unfortunately, this does not seem to be the case. In fact, what the researchers found was that “stocks are less likely to be added by socially responsible mutual funds when there is more negative media coverage of the firm” rather than because of some effective ‘fundamental’ ESG records, which is measured as the federal enforcement records related to environmental and labour laws, as well as governance-related best practices such as excess compensation or managerial entrenchment, or a lower percentage of independent directors. Indeed, for the KLD 400, the study finds a “negative association between membership… and fines paid for environmental violations over the past three years, relative to the control sample” and no association with labour violations. FTSE4Good is at least better on labour violations.

To further test the effectiveness of these funds’ screening techniques, the study focuses not just on membership but also on additions and deletions to the fund. But what they find is that stocks are added that have received positive media mentions rather than because they are displaying good behaviour through federal enforcement records. This applies to MSCI’s KLD ratings and the screening technique followed by FTSE Russell. Additions don’t seem to make any sense based on ‘fundamentals’ or even when looking at potential improvements in behaviour.

The ESG head at the asset management firm quoted earlier said: “Taken together with other research that shows that investor stewardship is one of the ESG tools that can actually make a meaningful difference – in making companies more sustainable and helping companies deal with real challenges such as climate change – this paper shows that not only are we not making any progress on figuring out how to strengthen this meaningful type of stewardship (by strengthening investors’ positions and making ESG ratings & research more meaningful), we're actually moving in the wrong direction.”

Returning to the BRT statement, the paper concludes: “Overall, our results suggest that signatory firms have not historically ‘walked the talk’ with respect to stakeholder orientation” but that “[m]uch remains to be explored in follow up work.”