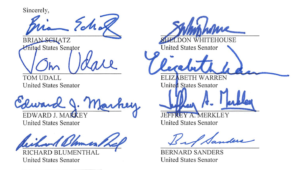 A group of eight US senators has sent a letter to 11 investors to enquire about their ESG risks related to tropical deforestation and human rights issues in Central America, Southeast Asia and West Africa.
The letter focuses on the damage done by the palm oil sector. “In Indonesia alone, the palm oil sector,” says the letter, “generates an estimated 250 million tons of carbon dioxide per year – roughly equivalent to the annual emissions of Spain.” The funds which have received a letter are: BlackRock, CalPERS, Fidelity, Dimensional, JPMorgan Chase, Kopernik Global Investors, Northern Cross, Northern Trust, Prudential Financial, TIAA–CREF and Vanguard.
The senators include Elizabeth Warren, the prominent Massachusetts Democrat, and former Presidential candidate Bernie Sanders.
The letter notes that the palm oil sector is also widely linked to human rights violations and social conflict, and forest crimes such as illegal logging, making it a perfect storm of ESG risk.
The senators wrote: “We are concerned that some companies in your portfolio may not be living up to their commitments to address deforestation in their supply chain—if they have made such commitments at all.”The firms were targeted because they provide global financing for some of the fastest growing companies linked to deforestation, and the senators are questioning the environmental, social, and governance criteria of these companies.
The materiality of these risks is increasingly being recognised by investors and the letter notes that addressing such risks “is in line with your fiduciary responsibility”. It seeks to find out what, for both their active and passive funds, is their due diligence for managing these risks, what are their ‘deforestation’ policies, if any, and whether a company has been excluded from their portfolios because it presented too high an ESG risk – and what that level of risk might mean.
A spokesman for BlackRock said: “We welcome the Senators’ interest in learning more about BlackRock’s approach to the material environmental, social and governance factors inherent in the business models of the companies in which we invest on behalf of our clients.” Vanguard stated that it was reviewing the senators’ letter. CalPERS was not able to respond by the time of publication.

Since this article was published, CalPERS has released this statement to RI from Beth Richtman, CalPERS managing investment director, sustainable investments program:

Our Sustainable Investments Program has been actively working to address deforestation risk in our portfolio. For instance, in August 2018, CalPERS, along with a large group of investors made specific requests. for improvements to the RSPO standards, pushing for stronger sustainability standards for the palm oil sector from the key sustainability certification body, RSPO.

In 2018, CalPERS joined multiple investor working groups on deforestation addressing soy, cattle and palm oil sectors. CalPERS staff views forests as key carbon sinks helping protect the CalPERS global investment portfolio from the physical risks of climate change. Currently forests are one of the best available “technologies” to sequester carbon. However, rather than just looking at one commodity in isolation (palm oil), we are looking more holistically at the drivers of deforestation across our global portfolio, various industries and commodities.